How to Make Corn Last as Long as Possible

If you plant your corn early, you could be collecting your harvest in mid September, but if the summer is on the cool side, those ears of corn could be collected as late as November.

Whichever situation you find yourself in, you're going to have one big question once that corn is picked: What's the best way to preserve your harvest? Fresh, homegrown corn is an awful thing to waste. It's a favorite at summer barbecues, and it can inject some much-needed fun in a winter meal. Luckily, you can preserve those kernels and keep them fresh on the cob by blanching and vacuum sealing with a FoodSaver® Vacuum Sealer. 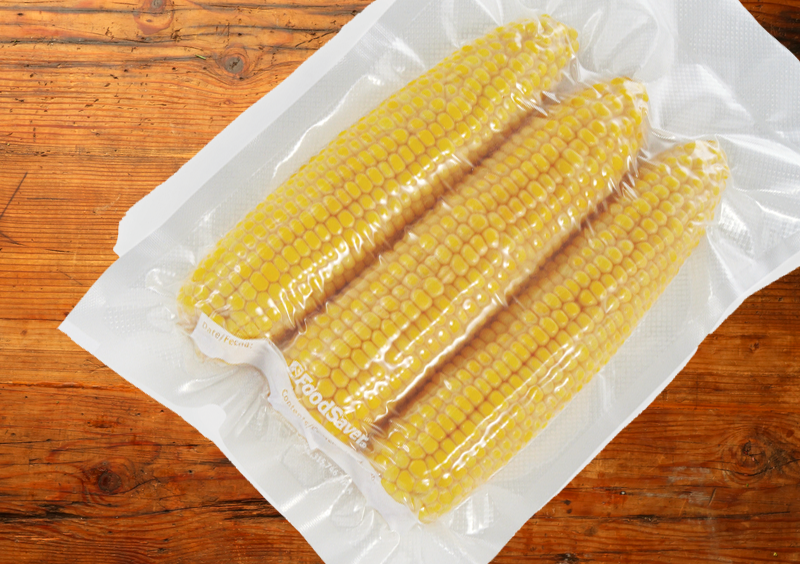 Here's the step-by-step process from stalk to freezer for saving your corn.

1. Prepare for Blanching
Once that cob is plucked from the stalk, its sugars start to break down. For preserving the freshest flavor, begin this process as soon as you get home from the market or farm stand. Fill a large pot about three-quarters full with water and bring it to a boil. Besides that, fill a large bowl with ice water. It's a good idea to keep extra ice on hand to cool the liquid as the boiling veggies are added.

2. Boil and Cool
Next, carefully put all the corn you intend to preserve into the boiling water. You'll want to let the cobs soak for about 10 minutes. Then, take out each ear with a pair of tongs and submerge them in the ice water. Let those soak for the same amount of time - 10 minutes.

3. Dry and Save
Draining and drying the ears is a must as it's the best way to achieve an optimal seal during the preservation process. Remove the corn from the ice water and dry with a cloth.

Now, you're ready to vacuum seal that corn fresh on the cob for later. Place the ears into a FoodSaver® Vacuum Seal Bag or Roll and vacuum seal them with your FoodSaver® Food Preservation System.

This method will protect your cobs from freezer burn and keep them tasting fresh for 5X longer than ordinary methods!